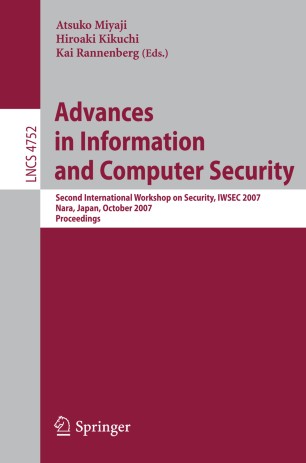 Advances in Information and Computer Security

The International Workshop on Security (IWSEC 2007) was the second in the annualseriesthat startedin 2006.IWSEC 2007washeld at the New Public Hall in Nara, Japan, during October 29–31, 2007. This year there were 112 paper submissions, and from these 30 papers were accepted. Accepted papers came from 27 di?erent countries, with the largest proportion coming from Japan (12). Estonia, China, Korea, Spain, Taiwan and the USA contributed 2 papers each and Canada, Germany, Greece, Poland, Turkeyand Vietnam contributed 1 paper each. We would liketo thank all of the authors who submitted papers to IWSEC 2007. The contributed papers were supplemented by one invited talk from the - inent researcher Prof. Doug Tygar (UC Berkeley) in information security. We were fortunate to have an energetic team of experts who formed the Program Committee. Their names may be found overleaf, and we are sincerely grateful for all their great e?orts. This team was supported by an even larger number of individuals who reviewedpapers in their particularareasof expertise. A list of these names is also provided; we hope it is complete.