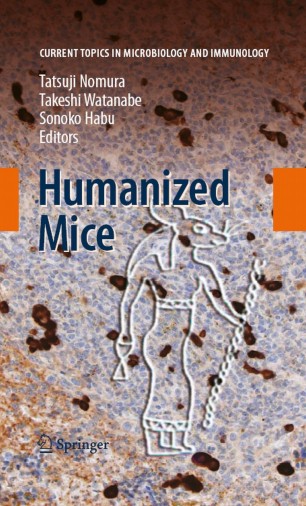 The term humanized mouse in this text refers to a mouse in which human tissues and cells have been transplanted and show the same biological function as they do in the human body. That is, the physiological properties and functions of tra- planted human tissues and cells can be analyzed in the mouse instead of using a living human body. It should therefore be possible to study the pathophysiology and treatment of human diseases in mice with good reproducibility. Thus, the hum- ized mouse can be used as a potent tool in both basic and clinical research in the future. The development of appropriate immunodeficient mice has been indispensable in the creation of the humanized mouse, which has been achieved through many years of efforts by several laboratories. The first stage on the road to the humanized mouse was the report on nude mice by Isaacson and Cattanach in 1962. Thereafter, nude mice were studied in detail by Falanagan and, in 1968, Pantelouris found that these mice have no thymus gland, which suggested that the mice lack transplan- tion immunity against xenografts such as human hematopoietic stem cells. At the Nude Mouse Workshops (organized by Regard, Povlsen, Nomura and colleagues) that were held nine times between 1972 and 1997, the possibility of creating a humanized mouse using nude mice was extensively examined. The results, however, showed that certain human cancers can be engrafted in nude mice, but unfortunately engraftment of normal human tissue was almost impossible.