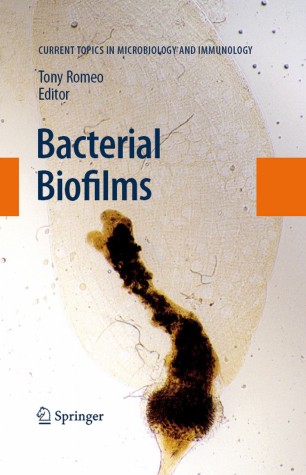 Throughout the biological world, bacteria thrive predominantly in surface attached, matrix enclosed, multicellular communities or biofilms, as opposed to isolated planktonic cells. This choice of lifestyle is not trivial, as it involves major shifts in the use of genetic information and cellular energy, and has profound consequences for bacterial physiology and survival. Growth within a biofilm can thwart immune function and antibiotic therapy and thereby complicate the treatment of infectious diseases, especially chronic and foreign device-associated infections. Modern studies of many important biofilms have advanced well beyond the descriptive stage, and have begun to provide molecular details of the structural, biochemical and genetic processes that drive biofilm formation and its dispersion. There is much diversity in the details of biofilm development among various species, but there are also commonalities. In most species, environmental and nutritional conditions greatly influence biofilm development. Similar kinds of adhesive molecules often promote biofilm formation in diverse species. Signaling and regulatory processes that drive biofilm development are often conserved, especially among related bacteria. Knowledge of such processes holds great promise for efforts to control biofilm growth and combat biofilm-associated infections.

This volume tends to focus on the biology of biofilms that affect human disease. It opens with chapters that provide the reader with current perspectives on biofilm development, physiology, environmental and regulatory effects, the role of quorum sensing, and resistance/phenotypic persistence to antimicrobial agents during biofilm growth. The next chapters are devoted to common problematic biofilms, those that colonize venous and urinary catheters. The final series of chapters examines biofilm formation by four species that are important pathogens and well studied models, one of which, Yersinia pestis, cleverly adopts a biofilm state of growth within its insect vector to promote disease transmission to mammalian hosts.