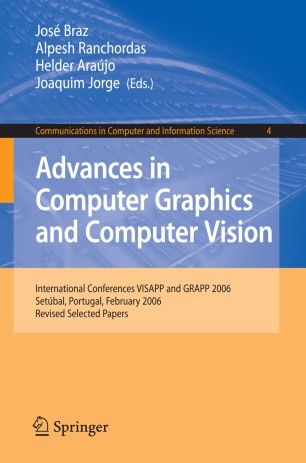 Part of the Communications in Computer and Information Science book series (CCIS, volume 4)

This book includes selected papers from the first International Conferences on Computer Vision Theory and Applications (VISAPP), and Computer Graphics Theory and Applications (GRAPP), jointly held in Setubal, Portugal, on February 25–28, 2006. We received 314 paper submissions for both conferences, quite a high number for a first venue. We had contributions from 44 different countries covering all five continents, which confirms the success and global reach of the two conferences. After a rigorous double-blind review, a total of 116 submissions were accepted as full papers. From those, the Program Committee selected 27 for publication in this book, which were then revised by the authors. Special thanks are due to all contributors and referees, without whom this book would not have been possible. VISAPP/GRAPP 2006 included four invited keynote lectures, presented by internationally recognized researchers. The presentations represented an important contribution to increasing the overall quality of the conference. We would like to express our appreciation to all invited keynote speakers, in alphabetical order, Marc Alexa (TU Berlin/Germany), André Gagalowicz (INRIA/France), Ken Perlin (New York University/USA), Peter Robinson (University of Cambridge/UK), whose presentations are partially included in the first section of the book. The second and third sections include selected papers from VISAPP 2006 and GRAPP 2006 respectively.