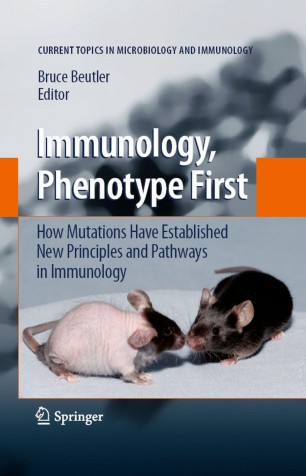 Immunology, Phenotype First: How Mutations Have Established New Principles and Pathways in Immunology

This monograph deals with the impact of classical genetics in immunology, prov- ing examples of how large immunological questions were solved, and new fields opened to analysis through the study of phenotypes, either spontaneous or induced. As broad as biology has become, there are those who do not fully understand what the genetic approach is, and how it differs fundamentally from most of the methods available to natural scientists. They may hold the opinion that genetics has run its course since Mendel read his paper on peas in 1865. “Why bother with classical genetics,” they may ask. “Won’t all genes be knocked out soon anyway?” Or they are intimidated by genetics, with its heavy reliance on model organisms that seem so alien. “What has C. elegans to do with me?” the questioning might go. “It doesn’t even have lymphocytes. ” Such skeptics may be unaware that the mouse is fast becoming as tractable a model organism as the fly, and that humans may not be too far behind. So I would like to introduce the topic with a few words about the power of genetics, and why it has contributed so much to immunology, and to bi- ogy in general. Genetics, as the word is used here, is not merely the science of heredity, but much more than that. It is the science of exceptions: the science that takes note of heritable variation and seeks to explain it at the most fundamental level.