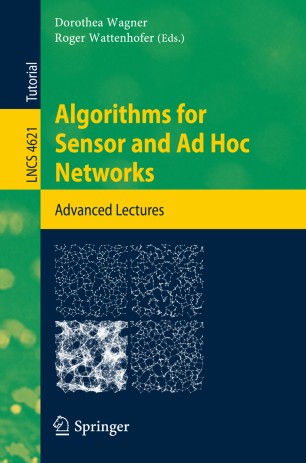 Thousands of mini computers (comparable to a stick of chewing gum in size), equipped with sensors, are deployed in some terrain or other. After activation the sensors form a self-organized network and provide data, for example about a forthcoming earthquake. The trend towards wireless communication increasingly affects electronic devices in almost every sphere of life. Conventional wireless networks rely on infrastructure such as base stations; mobile devices interact with these base stations in a client/server fashion. In contrast, current research is focusing on networks that are completely unstructured, but are nevertheless able to communicate (via several hops) with each other, despite the low coverage of their antennas. Such systems are called sensor or ad hoc networks, depending on the point of view and the application. Wireless ad hoc and sensor networks have gained an incredible research momentum. Computer scientists and engineers of all flavors are embracing the area. Sensor networks have been adopted by researchers in many fields: from hardware technology to operating systems, from antenna design to databases, from information theory to networking, from graph theory to computational geometry.