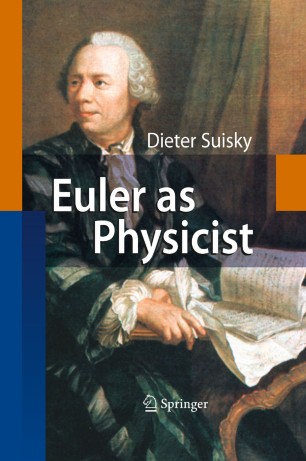 "Euler as Physicist" analyzes the exceptional role of Leonhard Euler (1707 - 1783) in the history of science and emphasizes especially his fundamental contributions to physics. Although Euler is famous as the leading mathematician of the 18th century, his contributions to physics are as important for their innovative methods and solutions. Several books are devoted to Euler as mathematician, but none to Euler as physicist, like in this book.

Euler’s contributions to mechanics are rooted in his life-long plan presented in two volume treatise programmatically entitled "Mechanics or the science of motion analytically demonstrated". Published in 1736, Euler’s treatise indicates the turn over from the traditional geometric representation of mechanics to a new approach. In writing Mechanics Euler did the first step to put the plan and his completion into practice through 1760. It is of particular interest to study how Euler made immediate use of his mathematics for mechanics and coordinated his progress in mathematics with his progress in physics. Euler's mechanics is not only a model for a consistently formulated theory, but allows for generalizations of Euler's principles.

It is shown that even problems in contemporary physics may be advantageously reconsidered and reformulated in terms of Euler's early unified approach. The interplay between physics and mathematics which appeared in the 18th century is compared to the development of physics in the 20th century, especially to the development of quantum mechanics between 1900 and 1930. The author aims to show how Euler' work represents a rare example of a simultaneous and harmonic composition of results of different origin and nature which have been joined into a unique and marvellous result.

"A leading mathematician of the 18th century, Leonhard Euler made innovative contributions to mechanics that laid the foundations of mathematical physics that are still in use today. … In this work written for professionals in the physical sciences, Suisky … lays out the details of simultaneous 18th-century advances in both mechanics and mathematics, with some later chapters devoted to 19th- and 20th-century applications. … Summing Up: Recommended. Researchers, faculty, and professionals." (F. Potter, Choice, Vol. 46 (11), August, 2009)