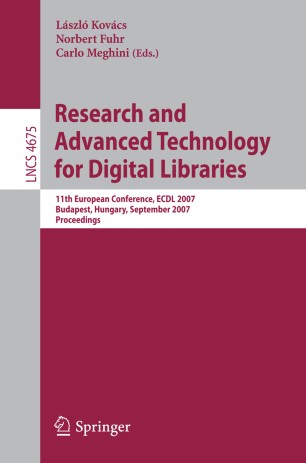 We are proud to present the proceedings of the 11th European Conference on Research and Advanced Technology for Digital Libraries (ECDL 2007) which, following Pisa (1997), Heraklion (1998), Paris (1999), Lisbon (2000), Da- stadt (2001), Rome (2002), Trondheim (2003), Bath (2004), Vienna (2005) and Alicante (2006), took place on September 16-21, 2007 in Budapest, Hungary. Over the last 11 years, ECDL has created a strong interdisciplinary com- nity of researchers and practitioners in the ?eld of digital libraries, and has formed a substantial body of scholarly publications contained in the conference proceedings. ECDL 2007 featured separate calls for paper and poster submissions, - sulting in 119 full papers and 34 posters being submitted to the conference. All papers were subject to an in-depth peer-review process; three reviews per submission were produced by a Program Committee of 69 members from 27 countries. In total 36 of 119 full paper submissions were accepted at the P- gram Committee meeting for presentation at the conference and publication in the proceedings with Springer, resulting in an acceptance rate of 30%. Also, 24 poster/demo submissions and another 15 papers from the full paper submissions wereacceptedforposterpresentationandpublicationintheproceedingsvolume.