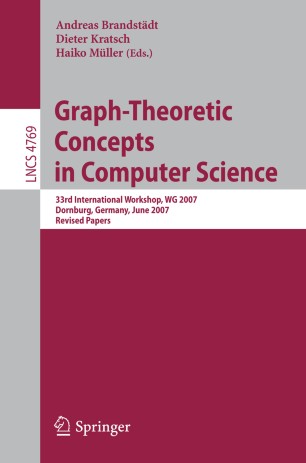 The 33rd International Conference “Workshop on Graph-Theoretic Concepts in Computer Science” (WG 2007) took place in the Conference Center in old castleinDornburgnearJena,Germany,June21–23,2007.Theapproximately80 participants came from various countries all over the world, among them Brazil, Canada, the Czech Republic, France, UK, Greece, Hungary, Italy, Japan, The Netherlands, Norway, Sweden, Taiwan, and the USA. WG 2007 continued the series of 32 previous WG conferences. Since 1975, the WG conference has taken place 20 times in Germany, four times in The Netherlands, twice in Austria as well as once in Italy, Slovakia, Switzerland, the Czech Republic, France and in Norway. The WG conference traditionally aims at uniting theory and practice by demonstrating how graph-theoretic concepts can be applied to various areas in computer science, or by extracting new problems from applications. The goal is to present recent researchresults and to identify and exploredirections of future research. Thecontinuinginterestinthe WGconferenceswasre?ectedin thehighn- ber of submissions; 99 papers were submitted and in an evaluation process with four reports per submission, 30 papers were accepted by the Program Comm- tee for the conference. Due to the high number of submissions and the limited schedule of 3 days, various good papers could not be accepted. There were invited talks by Ming-Yang Kao (Evanston, Illinois) on algori- mic DNA assembly, and by Klaus Jansen (Kiel, Germany) on approximation algorithms for geometric intersection graphs.