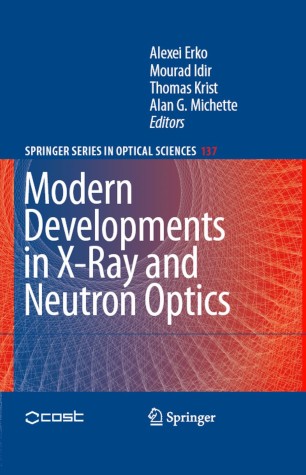 This volume describes modern developments in reflective, refractive and diffractive optics for short wavelength radiation as well as recent theoretical approaches to modelling and ray-tracing the X-ray and neutron optical systems. It is based on the joint research activities of specialists in X-ray and neutron optics from 11 countries, working together under the framework of the European Programme for Cooperation in Science and Technology (COST, Action P7) in the period 2002--2006. The chapters are written by leading specialists from European laboratories, universities and large facilities. In addition to new ideas and concepts, the contents provide a large amount of practical information about recently implemented devices and methods.

Alexei Erko received PhD degree in experimental physics (1981) from the Moscow Physical-Engineering Institute, Habilitation in Physics in 1991 and Professor in experimental physics in 1992. From 1978 to 1994 worked as Senior Scientist and later as a Head of Laboratory at the Institute of Solid State Physics and Institute of Microelectronics Technology Russian Academy of Sciences (Chernogolovka). Since 1994 he has a position of Senior Scientist at BESSY GmbH, Berlin, Germany. Research interests include x-ray optics, x-ray holography and synchrotron radiation beamlines design.

Mourad Idir received PhD degree in experimental physics (1994) from the Pierre et Marie Curie University (France). From 1994 to 2000 he worked in several institutions CEA/France and CXRO Berkeley (USA). Since 2001 he has a permanent position of at the CNRS in France. He joined the French synchrotron radiation facility SOLEIL in July 2003 as a leader of the hard x-ray group. Research interests include x-ray optics and synchrotron radiation beamlines design.

Thomas Krist received his PhD degree in experimental physics in 1982 from the Freie Universität Berlin. 1983 he continued his research at the Queen’s University in Kingston, Canada and later at the Hahn-Meitner Institut Berlin. Since 1986 he leads the neutron optics group at the Berlin Neutron Scattering Center (BENSC). Research interests include neutron optics, neutron reflectometry and thin films .

Alan G. Michette obtained his PhD in experimental neutrino physics in 1975 from University College London. After postdoctoral positions at University College and the Rutherford Laboratory, he moved to Queen Elizabeth College London as a Lecturer in physics in 1981, at which point his research interests switched to x-ray science. Following the merger with King’s College London in 1984, and a Humboldt Fellowship at the Max-Planck Institut für Quantenoptik in 1988-89, he was promoted to Reader in Physics in 1989 and Professor of Physics in 2001. His research interests include x-ray optics, including adaptive, diffractive and multilayer systems, and x-ray sources, especially plasma-based sources.