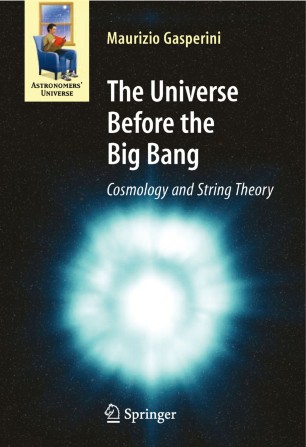 The Universe Before the Big Bang

Terms such as "expanding Universe", "big bang", and "initial singularity", are nowadays part of our common language. The idea that the Universe we observe today originated from an enormous explosion (big bang) is now well known and widely accepted, at all levels, in modern popular culture. But what happens to the Universe before the big bang? And would it make any sense at all to ask such a question? In fact, recent progress in theoretical physics, and in particular in String Theory, suggests answers to the above questions, providing us with mathematical tools able in principle to reconstruct the history of the Universe even for times before the big bang.

In the emerging cosmological scenario the Universe, at the epoch of the big bang, instead of being a "new born baby" was actually a rather "aged" creature in the middle of its possibly infinitely enduring evolution. The aim of this book is to convey this picture in non-technical language accessible also to non-specialists. The author, himself a leading cosmologist, draws attention to ongoing and future observations that might reveal relics of an era before the big bang.