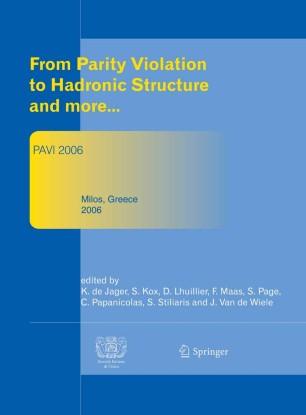 Proceedings of The 3rd Workshop From Parity Violation to Hadronic Structure and more...

c Societ` a Italiana di Fisica / Springer-Verlag 2007 The third workshopFrom Parity Violation to Hadronic Structure and more ... was held from May 16 to May 20, 2006, at the George Eliopoulos conference center on the Greek island of Milos. It is part of a series that started in Mainz in 2002 and was followed by a second workshop in Grenoble in 2004. While originally initiated by the extraction of the strangeness contribution to the electromagnetic form factors of the nucleon, we have continuously broadened the focus of this workshop series to the application of parity violation usinghadronicprobesandtoparityviolation experimentsinatomicphysics.Meanwhiletherehavebeenmanyexciting new proposals for using parity violation in other areas like in the search for new physics beyond the standard model or in exploring hadron structure. There are also close connections to the open question on the size of the two-photon exchange amplitude. Fifty years after the 1956 proposal of Lee and Yang to test the hypothesis of violation of parity symmetry in the weak interaction, the many applications of parity violation in very di?erent experiments are way beyond the scope of what Lee and Yang could have imagined. For the physics topics discussed during this workshop, the application of parity violation has become a standard workhorse that allows to extract many physics topics in di?erent experiments.