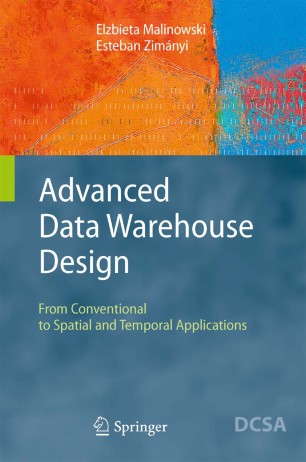 From Conventional to Spatial and Temporal Applications

Part of the Data-Centric Systems and Applications book series (DCSA)

A data warehouse stores large volumes of historical data required for analytical purposes. This data is extracted from operational databases; transformed into a coherent whole using a multidimensional model that includes measures, dimensions, and hierarchies; and loaded into a data warehouse during the extraction-transformation-loading (ETL) process.

Malinowski and Zimányi explain in detail conventional data warehouse design, covering in particular complex hierarchy modeling. Additionally, they address two innovative domains recently introduced to extend the capabilities of data warehouse systems, namely the management of spatial and temporal information. Their presentation covers different phases of the design process, such as requirements specification, conceptual, logical, and physical design. They include three different approaches for requirements specification depending on whether users, operational data sources, or both are the driving force in the requirements gathering process, and they show how each approach leads to the creation of a conceptual multidimensional model. Throughout the book the concepts are illustrated using many real-world examples and completed by sample implementations for Microsoft's Analysis Services 2005 and Oracle 10g with the OLAP and the Spatial extensions.

For researchers this book serves as an introduction to the state of the art on data warehouse design, with many references to more detailed sources. Providing a clear and a concise presentation of the major concepts and results of data warehouse design, it can also be used as the basis of a graduate or advanced undergraduate course. The book may help experienced data warehouse designers to enlarge their analysis possibilities by incorporating spatial and temporal information. Finally, experts in spatial databases or in geographical information systems could benefit from the data warehouse vision for building innovative spatial analytical applications.

Elzbieta Malinowski is a professor at the department of Computer and Information
Science at the Universidad de Costa Rica and a professional consultant in
Costa Rica in the area of the Data Warehousing. She received her master degrees
from Saint Petersburg Electrotechnical University, Russia (1982) and
University of Florida, USA (1996), and her Ph.D. degree from
UniversitÃ© Libre de Bruxelles, Belgium (2006). Her research interests
include data warehouses, OLAP systems, geographic information systems,
and temporal databases.

Esteban Zimányi is a professor of computer science at the Engineering Department of the Université Libre de Bruxelles (ULB), Belgium. He received the BSc degree (1988) and the doctorate degree (1992) in computer science from the Sciences Department at the ULB. His current research interests include conceptual modeling, geographic information systems, spatio-temporal databases, and semantic web.

"The origins of data warehousing are rooted in solid practicality. Data warehousing began as a response to the pain and frustration of the analytical/management community in large corporations.

It is thus a sign of maturation that a theoretical work has arisen that explains the theory behind data warehousing. This is that work.

But there are many other features that are positive contributions as well. Equally covered are the relational model and the object relational model. The book fairly recognizes both the strengths and the weaknesses of the different model types and the book is quite fair in the criticism. (This is important because – for whatever reason – often times when models are discussed, the discussion often turns into a religious food fight, where each side professes that its model is the only true and righteous way. This book does not condescend to this low level of discussion, and that is one of the strengths of the book.)

I saw only one small passage that I took exception to in the book. The book states that data marts can be created directly from source systems. While this is true – such creations can be made – when they are made, the resulting structure is not a data warehouse. But this is a small point and does not detract from the other very positive contributions made by the book.

As one reads the chapters on the different types of structures that can be found in conventional, spatial and temporal data warehouses, there is a faint echo of the seminal works of Donald Knuth, who, decades earlier wrote the leading book on data structures. It is interesting to see how far data structures have evolved from the early days of Knuth to the sophisticated data warehouses of today.

One of the really nice features of this book is that it is readable. So many theoretical books get wrapped up in theory and conventions to the point that they are essentially unintelligible to the mere mortal. This book does a very nice job of merging theory with readability. One big thank you to the authors for this aspect of the book.

This book is a very welcome contribution to the body of knowledge surrounding data warehousing and analytics, and belongs on the bookshelf of every serious student and practitioner."