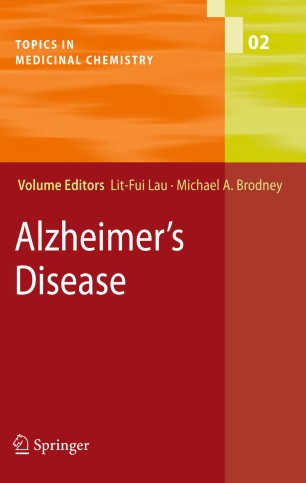 Alzheimer’s disease (AD) is a neurodegenerative disease that robs the minds of our elderly population. Approximately one in every eight adults over the age of 65 and nearly half of those over 85 are afflicted with this disease. The aging population in developed societies will impose an ever increasing socioeconomic threat in the future. Current medicines for AD patients are mainly symptomatic treatments and a huge unmet medical need exists to slow the progression of this disease. A great deal of research has been dedicated to understanding the pathogenesis of AD from which comes many ideas for intervening with its progression. Some of these ideas have been fast-tracked to clinical trials due to the availability of medicines with proven clinical efficacies for other diseases (e.g. atorvastatin, simvastatin, rosiglitazone and clioquinol) while others represent novel chemical entities (e.g. glycogen synthase kinase-3 inhibitors).

This volume will first review existing cholinesterase inhibitors prescribed for AD patients followed by some target mechanisms with ongoing clinical trials. It offers a glimpse of what our future medicine cabinets may look like for AD patients. It also provides an interesting read on why and how current medicines for other indications could potentially be used to treat AD.