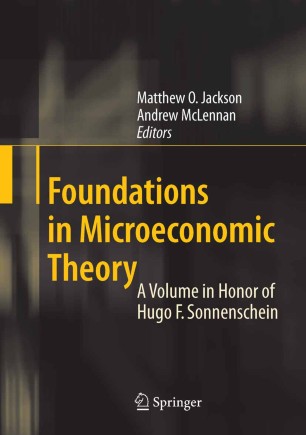 A Volume in Honor of Hugo F. Sonnenschein

What a wonderful occasion it is to be celebrating 65 years of Hugo Sonn- schein! Given his many contributions to economic research and academia more broadly, there is much to celebrate. This volume, presented to Hugo at a confer­ ence in his honor at the University of Chicago in October 2005, highlights one of his deepest contributions. It is perhaps the hardest to detect from reading his bios and vita; but something that he is famous for among economists in general and economic theorists in particular. It is his incredible record as a mentor and advisor of students. In putting this volume together, we have collected papers from Hugo's students with the aim of demonstrating his tremendous impact as an advisor. The papers span decades, with the earliest coming from his advisees in the first years of his career and the most recent coming in the last two years after his return to research and advising that followed his adventures as a university administrator. The con­ tributors include not only his graduate advisees, but also some of his undergraduate advisees and still others who did not have him as an advisor, but nonetheless con­ sider him a primary mentor in their training as economic theorists. Each paper is accompanied with a brief preface by the student that provides background on the paper and indicates Hugo's influence on its genesis.