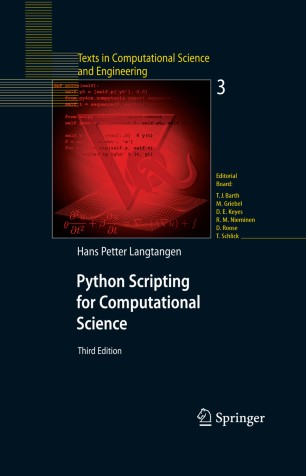 Part of the Texts in Computational Science and Engineering book series (TCSE, volume 3)

Numerous readers of the second edition have noti?ed me about misprints and possible improvements of the text and the associated computer codes. The resulting modi?cations have been incorporated in this new edition and its accompanying software. The major change between the second and third editions, however, is caused by the new implementation of Numerical Python, now called numpy. The new numpy package encourages a slightly di?erent syntax compared to the old Numeric implementation, which was used in the previous editions. Since Numerical Python functionality appears in a lot of places in the book, there are hence a huge number of updates to the new suggested numpy syntax, especially in Chapters 4, 9, and 10. The second edition was based on Python version 2.3, while the third edition contains updates for version 2.5. Recent Python features, such as generator expressions (Chapter 8.9.4), Ctypes for interfacing shared libraries in C (Chapter 5.2.2), the with statement (Chapter 3.1.4), and the subprocess module for running external processes (Chapter 3.1.3) have been exempli?ed to make the reader aware of new tools. Chapter 4.4.4 is new and gives a taste of symbolic mathematics in Python.