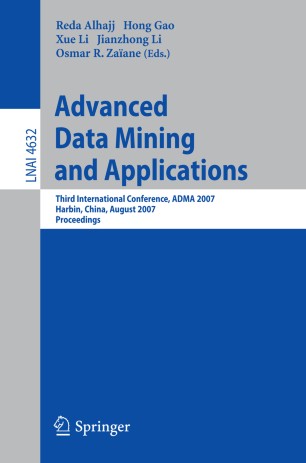 The Third International Conference on Advanced Data Mining and Applications (ADMA) organized in Harbin, China continued the tradition already established by the first two ADMA conferences in Wuhan in 2005 and Xi’an in 2006. One major goal of ADMA is to create a respectable identity in the data mining research com- nity. This feat has been partially achieved in a very short time despite the young age of the conference, thanks to the rigorous review process insisted upon, the outstanding list of internationally renowned keynote speakers and the excellent program each year. The impact of a conference is measured by the citations the conference papers receive. Some have used this measure to rank conferences. For example, the independent source cs-conference-ranking.org ranks ADMA (0.65) higher than PAKDD (0.64) and PKDD (0.62) as of June 2007, which are well established conferences in data mining. While the ranking itself is questionable because the exact procedure is not disclosed, it is nevertheless an encouraging indicator of recognition for a very young conference such as ADMA.