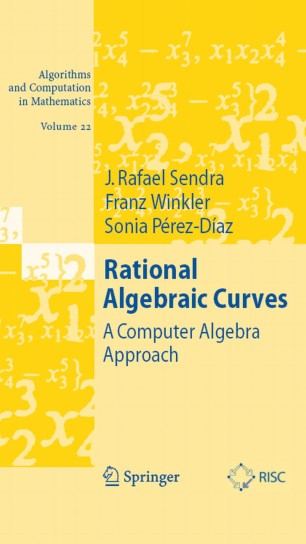 Part of the Algorithms and Computation in Mathematics book series (AACIM, volume 22)

Algebraic curves and surfaces are an old topic of geometric and algebraic investigation. They have found applications for instance in ancient and m- ern architectural designs, in number theoretic problems, in models of b- logical shapes, in error-correcting codes, and in cryptographic algorithms. Recently they have gained additional practical importance as central objects in computer-aided geometric design. Modern airplanes, cars, and household appliances would be unthinkable without the computational manipulation of algebraic curves and surfaces. Algebraic curves and surfaces combine fas- nating mathematical beauty with challenging computational complexity and wide spread practical applicability. In this book we treat only algebraic curves, although many of the results and methods can be and in fact have been generalized to surfaces. Being the solution loci of algebraic, i. e. , polynomial, equations in two variables, plane algebraiccurvesarewellsuited forbeing investigatedwith symboliccomputer algebra methods. This is exactly the approach we take in our book. We apply algorithms from computer algebra to the analysis, and manipulation of al- braic curves. To a large extent this amounts to being able to represent these algebraic curves in di?erent ways, such as implicitly by de?ning polyno- als, parametrically by rational functions, or locally parametrically by power series expansions around a point.

"The central problem in the book is the question whether a given algebraic curve is parametrizable and in case to compute a good rational parametrization. This involves an analysis of the singularities to compute the genus of the curve. … There are several exercises at the end of each chapter. … The book is a good basis for graduate students specializing in constructive algebraic curve geometry. It can be used for lectures and seminars in computer algebra based on Maple and CASA." (Gerhard Pfister, Zentralblatt MATH, Vol. 1129 (7), 2008)

"Algebraic geometry is a central field within mathematics which is often viewed as difficult for outsiders to enter. Recent years have seen many books which present various topics of algebraic geometry from a computational viewpoint, thereby making the subject more accessible. The book under review, RAC for short, is part of this positive trend. Its main focus is parametrizing rational plane algebraic curves. It is a graduate level text aimed at fairly wide readership, including for example readers interested primarily in computer-aided geometric design." (David P. Roberts, MathDL, May, 2008)

"The book Rational algebraic curves: a computer algebra approach is a very complete text on rational curves. … The book is really an excellent reference on genus zero curves. It is very useful, mainly due to the computational material presented. It looks to be intended for graduate students, but anyone who wants to know how symbolic algebraic computation can clarify the study of algebraic curves will find it very helpful. A long list of references is provided at the end of the book." (Valmecir A. Bayer, Mathematical Reviews, Issue 2009 a)