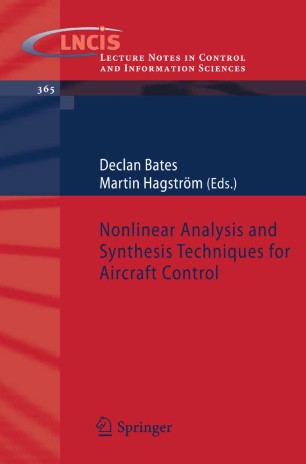 Despite many signi?cant advances in the theory of nonlinear control in recent years, the majority of control laws implemented in the European aerospace - dustry are still designed and analysed using predominantly linear techniques applied to linearised models of the aircrafts’ dynamics. Given the continuous increase in the complexity of aircraft control laws, and the corresponding - crease in the demands on their performance and reliability, industrial control law designers are highly motivated to explore the applicability of new and more powerful methods for design and analysis. The successful application of fully nonlinear control techniques to aircraft control problems o?ers the prospect of improvements in several di?erent areas. Firstly, there is the possibility of - proving design and analysis criteria to more fully re?ect the nonlinear nature of the dynamics of the aircraft. Secondly, the time and e?ort required on the part of designers to meet demanding speci?cations on aircraft performance and h- dling could be reduced. Thirdly, nonlinear analysis techniques could potentially reduce the time and resources required to clear ?ight control laws, and help to bridge the gap between design, analysis and ?nal ?ight clearance. Theaboveconsiderationsmotivatedtheresearchpresentedinthisbook,which is the result of a three-year research e?ort organised by the Group for Aeron- tical Research and Technology in Europe (GARTEUR). In September 2004, GARTEUR Flight Mechanics Action Group 17 (FM-AG17) was established to conduct research on ”New Analysis and Synthesis Techniques for Aircraft Control”.