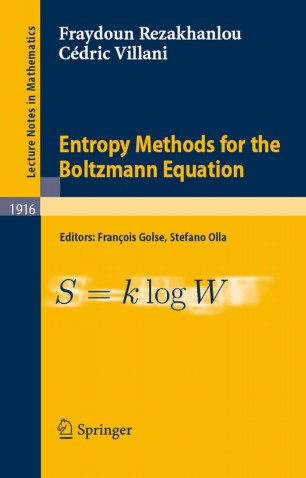 Entropy Methods for the Boltzmann Equation

Entropy and entropy production have recently become mathematical tools for kinetic and hydrodynamic limits, when deriving the macroscopic behaviour of systems from the interaction dynamics of their many microscopic elementary constituents at the atomic or molecular level.

During a special semester on Hydrodynamic Limits at the Centre Émile Borel in Paris, 2001 two of the research courses were held by C. Villani and F. Rezakhanlou. Both illustrate the major role of entropy and entropy production in a mutual and complementary manner and have been written up and updated for joint publication. Villani describes the mathematical theory of convergence to equilibrium for the Boltzmann equation and its relation to various problems and fields, including information theory, logarithmic Sobolev inequalities and fluid mechanics. Rezakhanlou discusses four conjectures for the kinetic behaviour of the hard sphere models and formulates four stochastic variations of this model, also reviewing known results for these.