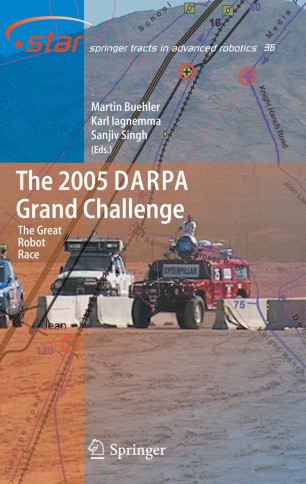 At the dawn of the new millennium, robotics is undergoing a major transformation in scope and dimension. From a largely dominant industrial focus, robotics is rapidly expanding into the challenges of unstructured environments. Interacting with, assi- ing, serving, and exploring with humans, the emerging robots will increasingly touch people and their lives. The goal of the new series of Springer Tracts in Advanced Robotics (STAR) is to bring, in a timely fashion, the latest advances and developments in robotics on the basis of their significance and quality. It is our hope that the wider dissemination of research developments will stimulate more exchanges and collaborations among the research community and contribute to further advancement of this rapidly growing field. The volume edited by Martin Buehler, Karl Iagnemma and Sanjiv Singh presents a unique and extensive collection of the scientific results by the teams which took part into the DARPA Grand Challenge in October 2005 in the Nevada desert. This event reached an incredible peak of popularity in the media, the race of the century like someone called it! The Grand Challenge demonstrated the fast growing progress - ward the development of robotics technology, as it showed the feasibility of using mobile robots operating autonomously in real world scenarios.