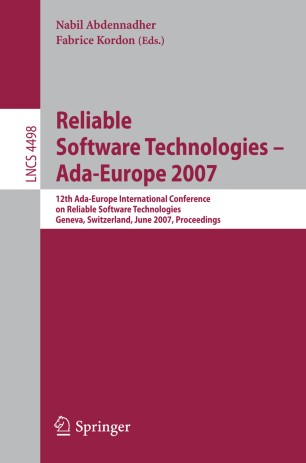 Reliable Software Technologies is an annual series of international conferences devoted to the promotion and advancement of all aspects of reliable software technologies. The objective of this series of conferences, initiated and sponsored by Ada-Europe, the European federation of national Ada societies, is to provide a forum to promote the development of reliable softwares both as an industrial technique and an academic discipline. Previous editions of the Reliable Software Technologies conference were held in: Porto (Portugal) in 2006, York (UK) in 2005, Palma de Mallorca (Spain) in 2004,Toulouse (France) in 2003,Vienna (Austria) in 2002,Leuven (Belgium) in 2001,Potsdam(Germany)in2000,Santander(Spain)in1999,Uppsala(Sweden) in 1998, London (UK) in 1997 and Montreux (Switzerland) in 1996. The 12th International Conference on Reliable Software Technologies took place in Geneva, Switzerland, June 25-29, 2007, under the continued sponsoring ofAda-Europe,incooperationwithACMSIGAda.Itwasorganizedbymembers of the University of Applied Sciences, Western Switzerland (Engineering School of Geneva), in collaboration with colleagues from various places in Europe. The 13th conference, in 2008, will take place in Venice, Italy.