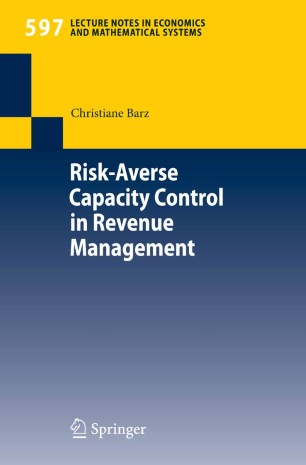 “If necessity is the mother of invention, then deregulation is the father, and r- enue management (also known as yield management) is the couple’s golden child – at least as far as operations research is concerned.” (Horner, 2000, p. 47) Deregulation had a signi?cant impact on the U.S. airline industry in the late 1970s. Charter and low-cost airlines such as People Express and Southwest wereabletoo?erseatsatafractionofthepricechargedbyestablishedcarriers like Pan Am and American Airlines. Due to their di?erent cost structure, it seemed to be impossible for the big carriers to o?er tickets at the same low price. Yet they had to ?nd a way to compete. Robert L. Crandall from American Airlines is widely credited with the - lution to the problem:yield management – today calledrevenue management, since it maximizes revenue earned on a ?ight rather than yield (revenue per passenger mile). The idea was simple: American Airlines ?ights were only half full on - erage. O?ering the empty seats at a discount price would not only enable the carriers to compete with the low-cost airlines but even create additional r- enue, if (1) it were possible to prevent cannibalization, i.e. the sale of discount tickets to consumers who would otherwise be willing to pay full fare, and if (2) it could be assured that only the seats that would otherwise ?y empty were sold at the low price.