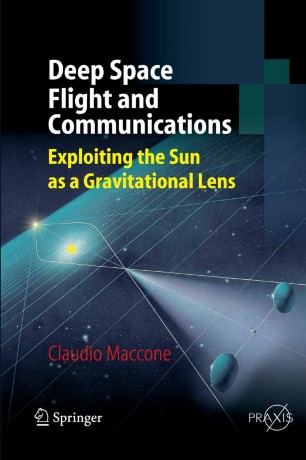 Exploiting the Sun as a Gravitational Lens

The majority of books dealing with prospects for interstellar flight tackle the problem of the propulsion systems that will be needed to send a craft on an interstellar trajectory. The proposed book looks at two other, equally important aspects of such space missions, and each forms half of this two part book.

Part 1 looks at the ways in which it is possible to exploit the focusing effect of the Sun as a gravitational lens for scientific missions to distances of 550 AU and beyond into interstellar space. The author explains the mechanism of the Sun as a gravitational lens, the scientific investigations which may be carried out along the way to a distance of 550 AU (and at the 550 AU sphere itself), the requirements for exiting the Solar System at the highest speed and a range of project ideas for missions entering interstellar space.

Part 2 of the book deals with the problems of communicating between an interstellar spaceship and the Earth, especially at very high speeds. Here the author assesses a range of mathematical tools relating to the Karhunen-Loève Transform (KLT) for optimal telecommunications, technical topics that may one day enable humans flying around the Galaxy to keep in contact with the Earth. This part of the book opens with a summary of the author’s 2003 Pešek Lecture presented at the IAC in Bremen, which introduces the concept of KLT for engineers and ‘newcomers’ to the subject. It is planned to include a DVD containing the full mathematical derivations of the KLT for those interested in this important mathematical tool whilst the text itself will contain the various results without outlines of the mathematical proofs. Astronautical engineers will thus be able to see the application of the results without getting bogged down in the mathematics.