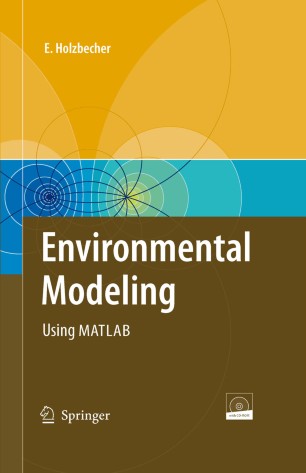 “Environmental Modeling using MATLAB R ” by Ekkehard Holzbecher is an excellent publication and a novel approach covering the intersection of two important, growing worlds – the world of environmental modeling and of mathematical software. Environmental modeling is a science that uses mathematics and comp- ers to simulate physical and chemical phenomena in the environment (e.g., environmental pollution). This science was initially based on pen-and-paper calculations using simple equations. In the last 50 years, with the devel- mentofdigitalcomputers,environmentalmodelshavebecomemoreandmore complex, requiring often numerical solutions for systems of partial di?erential equations. Mathematical software, such as MATLAB R , has been developed in the lasttwo decades. Thesepackageshavebeen particularlysuccessfulfor usersof personal computers. Mathematical software provides a set of tools for solving equations both analytically and numerically. This is a major improvement in comparison to the programming tools (e.g., FORTRAN) previously used by scientists. Mathematical software o?ers extremely valuable and cost-e?ective tools that improve the productivity of the programmer by at least an order of magnitude. The use of these tools also minimizes the risk of programming errors. In addition, mathematical software o?ers unique visualization tools that allow the user to immediately visualize and often animate simulation results. Scientists who become familiar with a tool like MATLAB R will never go back to previous ways of computer programming.