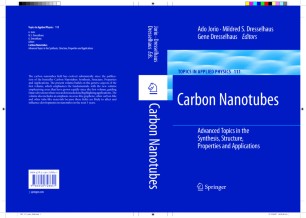 Advanced Topics in the Synthesis, Structure, Properties and Applications

The carbon nanotubes field has evolved substantially since the publication of the bestseller "Carbon Nanotubes: Synthesis, Structure, Properties and Applications". The present volume builds on the generic aspects of the aforementioned book, which emphasizes the fundamentals, with the new volume emphasizing areas that have grown rapidly since the first volume, guiding future directions where research is needed and highlighting applications. The volume also includes an emphasis on areas like graphene, other carbon-like and other tube-like materials because these fields are likely to affect and influence developments in nanotubes in the next 5 years.

A. Jorio received his Ph.D in Physics from the Universidade Federal de Minas Gerais (UFMG), Belo Horizonte, Brazil, in 1999. He is a Professor of Physics at UFMG since 2002, and is a conseillor of the Brazilian National Institute of Metrology (INMETRO) since 2006. He worked previously in various reserach institutes like the Institute Laue-Langevin (ILL), Grenoble, France and the Massachusetts Institute of Technology (MIT), Cambridge, USA, and has been awarded with the PROFIX and Productivity grants from Brazil. He co-authored with Profs. Dresselhaus a book of the applications of group theory to condensed matter physics. His research activities cover the optical properties of nanomaterials and the fundamental aspects of nanometrology.

M. S. Dresselhaus received her Ph.D. in Physics from the University of Chicago, in 1958. She is an Institute Professor at the Massachusetts Institute of Technology and has been active in many aspects of condensed matter and materials research with particular emphasis on carbon science including nanostructures such as carbon nanotubes and fullerenes, but also including nanowires and other nanomaterials systems relevant to low dimensional thermoelectricity. She is the recipient of the National Medal of Science in the US and 24 honorary degrees worldwide. She served as the Director of the Office of Science at the DOE in 2000--2001 and co-chaired a DOE report "Basic Research Needs for the Hydrogen Economy (2003).

G. Dresselhaus received his Ph.D. in physics from the University of California in 1955. He was a faculty member at the University of Chicago, and on the physics faculty at Cornell University before joining the MIT Lincoln Laboratory in 1960 as a staff member. In 1976 he assumed his current senior staff position at the MIT Francis Bitter Magnet Laboratory. His area of interest is the electronic structure of nanomaterials and he has co-authored with M.S. Dresselhaus several books on fullerenes, nanowires, and nanotubes.