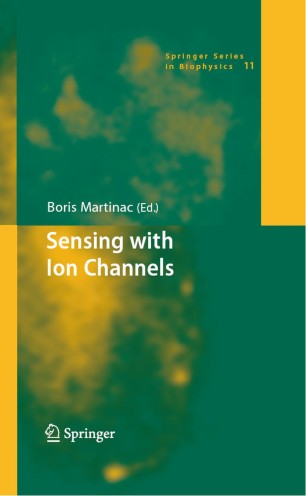 All living cells are able to detect and translate environmental stimuli into biologically meaningful signals. Sensations of touch, hearing, sight, taste, smell or pain are essential to the survival of all living organisms. The importance of sensory input for the existence of life thus justifies the effort made to understand its molecular origins. Sensing with Ion Channels focuses on ion channels as key molecules enabling biological systems to sense and process the physical and chemical stimuli that act upon cells in their living environment. Its aim is to serve as a reference to ion channel specialists and as a source of new information to non specialists who want to learn about the structural and functional diversity of ion channels and their role in sensory physiology.

Boris Martinac graduated in Physics from the Rheinish-Westphalian Technical University in Aachen, Germany in 1976 and received his PhD in Biophysics from the same university in 1980. His doctoral research on ion flux measurements across the cell membrane of a ciliate Paramecium was supervised by Eilo Hildebrand at the Research Centre Jülich. He then did postdoctoral work on electrophysiology of ciliates with Hans Machemer at the Ruhr University in Bochum. From there he moved in 1983 to the laboratory of Ching Kung at the University of Wisconsin, Madison where he used the patch clamp technique to study microbial ion channels. In 1993, he accepted a faculty position in the Department of Pharmacology at the University of Western Australia. In 2005, he moved to the School of Biomedical Sciences at the University of Queensland, Australia where he is a Foundation Professor of Biophysics.

Boris Martinac has earned international reputation as one of the pioneers in characterisation of ion channels in microbial cells. The discovery, cloning and structural and functional characterisation of mechanosensitive ion channels in bacteria present his original contribution to the ion channel research field. He is the recipient of a Fellowship by the French Ministry of Research and Higher Education and an Australian Professorial Fellowship by the Australian Research Council. He served as a President of the Australian Society for Biophysics, and has also served as a member of the Advisory Board of the European Biophysics Journal and as a Corresponding Member for Australia and New Zealand to the Physiological Reviews Editorial Board.