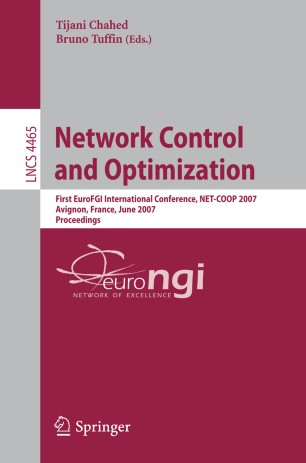 This volume 4465 of the Lecture Notes in Computer Science series is a coll- tion of the papers of the NET-COOP 2007 conference, a ?rst-of-a-series Euro- NGI/FGI Conference on Network Control and Optimization. The event took place in the beautiful city of Avignon, France, June 5–7, 2007, was jointly or- nized by INRIA and the University of Avignon and was hosted by the latter. Internet communications and services areexperiencing an increasein volume and diversity both in their capacity and in their demand. This comes at the cost of an increase in the complexity of their control and optimization, mainly due to the heterogeneity in architecture as well as usage. The need for new ways of e?ectively and fairly allocating resources belonging to a wide set of not necessarily cooperative networks to a collection of possibly competing users is urgent and is the aim of this conference. Speci?cally, this conference aims at developing research on control and op- mization of the Internet, ranging from performance evaluation and optimization of general stochastic networks to more speci?c targets such as lower-layer fu- tionalities in mobile networks, routing for computational grids, game theoretic approaches to access control, cooperation, competition and adversary capacities in diverse environments.