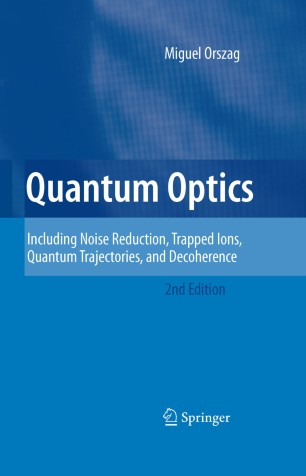 Quantum Optics gives a very broad coverage of basic laser-related phenomena that allow scientist and engineers to carry out research in quantum optics and laser physics.

It covers quantization of the electromagnetic field, quantum theory of coherence, atom-field interaction models, resonance fluorescence, quantum theory of damping, laser theory using both the master equation and the Langevin theory, the correlated emission laser, input-output theory with applications to non-linear optics, quantum trajectories, quantum non-demolition measurements and generation of non-classical vibrational states of ions in a Paul trap. In this second edition, there is an enlarged chapter on decoherence, as well as additional material dealing with elements of quantum computation, entanglement of pure and mixed states as well as a chapter on quantum copying and processors.

These topics are presented in a unified and didactic manner. The presentation of the book is clear and pedagogical; it balances the theoretical aspect of quantum optics and quantum information theory with recent relevant experiments.