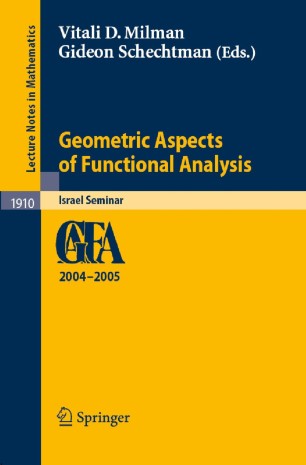 This collection of original papers related to the Israeli GAFA seminar (on Geometric Aspects of Functional Analysis) during the years 2004-2005 follows the long tradition of the previous volumes that reflect the general trends of the Theory and are a source of inspiration for research.

Most of the papers deal with different aspects of the Asymptotic Geometric Analysis, ranging from classical topics in the geometry of convex bodies, to inequalities involving volumes of such bodies or, more generally, log-concave measures, to the study of sections or projections of convex bodies. In many of the papers Probability Theory plays an important role; in some limit laws for measures associated with convex bodies, resembling Central Limit Theorems, are derive and in others probabilistic tools are used extensively. There are also papers on related subjects, including a survey on the behavior of the largest eigenvalue of random matrices and some topics in Number Theory.