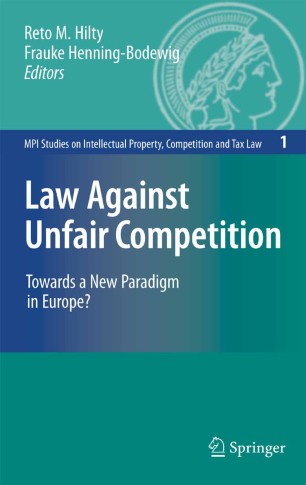 Towards a New Paradigm in Europe?

Unfair competition law is concerned with fair play in commerce. It is generally regarded as necessary – together with antitrust law – in order to steer competition along an orderly course, and thereby to contribute to promoting an efficient market system that serves the interests of all participants. Nevertheless the significance of unfair competition law varies from one country to another. Whereas in some countries, such as Germany, it is seen as one of the most effective commercial laws, in other countries, such as the United Kingdom, it leads rather a shadowy existence. From the outset, this discrepancy laid in the differences in national legal s- tems. Whilst those continental European countries that possessed a written civil law when instances of unfair competition emerged, more or less successfully attempted to incorporate them in the existing tort law system, protection in the common law countries was restricted to some narrowly defined torts, in particular “passing off”. At this stage one of the few shared convictions was, that the protection of “honest entrepreneurs” was at issue; on this basis, in 1900, the only regulation at the int- bis national level until now was enacted, Art. 10 of the Paris Convention.