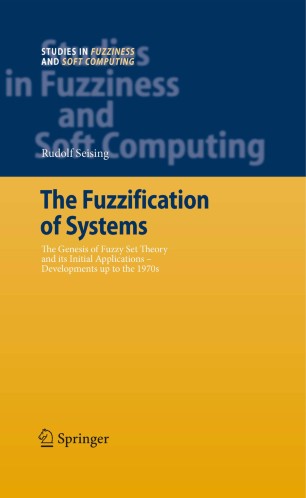 The Fuzzification of Systems

Part of the Studies in Fuzziness and Soft Computing book series (STUDFUZZ, volume 216)

In 1965 Lotfi Zadeh, a professor of electrical engineering at the University of California in Berkeley, published the first of his papers on his new Fuzzy Set Theory. Since the 1980s this mathematical theory of "unsharp amounts" has been applied in many different fields with great success. The word "fuzzy" has also become very well-known among non-scientists thanks to extensive advertising campaigns for fuzzy-controlled household appliances and to their prominent presence in the media, first in Japan and then in other countries. On the other hand, the story of how Fuzzy Set Theory and its earliest applications originated remains largely unknown.

In this book, the history of Fuzzy Set Theory and the ways it was first used are incorporated into the history of 20th century science and technology. Influences from philosophy, system theory and cybernetics stemming from the earliest part of the 20th century are considered alongside those of communication and control theory from mid-century.

Today, Fuzzy Set Theory is the core discipline of "soft computing," and provides new impetus for research in the field of Artificial Intelligence.

Rudolf Seising received his MS degree (Diplom) in mathematics from the Ruhr-University of Bochum 1986. He received his Ph.D. degree (Dr.) in philosophy of science in 1995 for his work on the philosophy of probability theory in quantum mechanics, and his habilitation degree (PD) of history of science from the LMU of Munich in 2004 for his work on the history of the theory of fuzzy sets.
He was a research assistant for computer sciences at the University of the Armed Forces in Munich (1988 - 1995) and for history of sciences at the same university (1995-2002).
Since 2002, he has worked as a research assistant for medical expert and knowledge-based systems at the University of Vienna Medical School (since 2004) of the Medical University of Vienna respectively.
Rudolf Seising teaches philosophy and history of medicine, medical computer sciences and especially history and philosophy of soft computing. His research interests include the philosophy and history of artificial intelligence.

"Seising follows historically and contextually fuzzy set theory and its early applications by telling the story of Lotfi Zadeh, who coined the term ‘fuzzy set’ in 1964. This book is both a scientific reading and a biography; it attempts (and succeeds) to shed light on the (historic) context of the inception of this theory … . Summing Up: Highly recommended. Upper-division undergraduates through professionals." (G. Trajkovski, CHOICE, Vol. 45 (5), January, 2008)

"The book is certainly a valuable contribution in that it provides the reader with a lot of historical data, references, and figures. The author has patiently collected his material over the years. … the book can serve as a useful source describing many historical events related to the history of fuzzy sets." (Radim Belohlávek, Mathematical Reviews, Issue 2009 e)