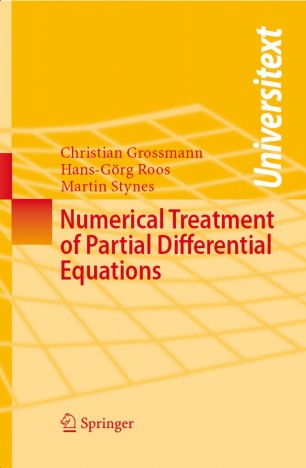 Translated and revised by Martin Stynes

Many well-known models in the natural sciences and engineering, and today even in economics, depend on partial di?erential equations. Thus the e?cient numerical solution of such equations plays an ever-increasing role in state-- the-art technology. This demand and the computational power available from current computer hardware have together stimulated the rapid development of numerical methods for partial di?erential equations—a development that encompasses convergence analyses and implementational aspects of software packages. In 1988 we started work on the ?rst German edition of our book, which appeared in 1992. Our aim was to give students a textbook that contained the basic concepts and ideas behind most numerical methods for partial di?er- tial equations. The success of this ?rst edition and the second edition in 1994 encouraged us, ten years later, to write an almost completely new version, taking into account comments from colleagues and students and drawing on the enormous progress made in the numerical analysis of partial di?erential equations in recent times. The present English version slightly improves the third German edition of 2005: we have corrected some minor errors and added additional material and references.