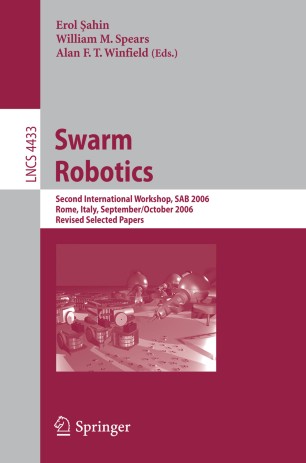 Swarm robotics is the study of how large numbers of relatively simple physically embodied agentscanbe designedsuchthat a desiredcollectivebehavioremerges from the local interactions among agents and between the agents and the en- ronment. Swarm robotics has emerged as a novel approach to the coordination of large numbers of robots and is inspired from observation of social insects – ants, termites, wasps and bees – which stand as fascinating examples of how a large number of simple individuals can interact to create collectively intelligent systems. Socialinsects areknownto coordinatetheir actionsto accomplishtasks that are far beyond the capabilities of a single individual: termites build large and complex mounds, army ants organize impressive foraging raids, ants can collectively carry large prey. Such coordination capabilities are still well beyond the reach of current multi-robot systems. Researchon swarmroboticshasseen a signi?cantincreasein the last 5 years. A number of successful swarm robotic systems have now been demonstrated in the laboratory and the study of the design, modelling, implementation and analysis of swarm robotic systems has become a hot topic of research. This workshop was organized within SAB 2006, as a sequel to the successful ?rst swarmroboticsworkshopin2004,withtheaimofreviewingandupdatingrecent advances on the topic. We received 21 full papers (20 research + 1 review) and accepted 14 (13 research + 1 review). Overall, we, as organizers, were pleased with the number of submissions, and a number of our reviewers explicitly commented on the generally high quality of the papers.