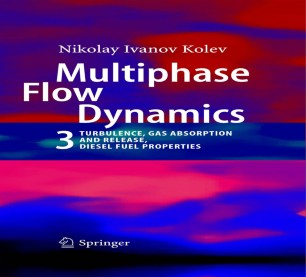 Volume 3 is devoted to selected Chapters of the multiphase fluid dynamics that are important for practical applications. The state of the art of the turbulence modeling in multiphase flows is presented. As introduction, some basics of the single-phase boundary layer theory including some important scales and flow oscillation characteristics in pipes and rod bundles are presented. Then the scales characterizing the dispersed flow systems are presented. The description of the turbulence is provided at different level of complexity: simple algebraic models for eddy viscosity, algebraic models based on the Boussinesq hypothesis, modification of the boundary layer share due to modification of the bulk turbulence, modification of the boundary layer share due to nucleate boiling. Then the role of the following forces on the matematical description of turbulent flows is discussed: the lift force, the lubrication force in the wall boundary layer, and the dispersion force. A pragmatic generalization of the k-eps models for continuous velocity field is proposed containing flows in large volumes and flows in porous structures. Method of haw to derive source and sinks terms for multiphase k-eps models is presented. A set of 13 single- and two phase benchmarks for verification of k-eps models in system computer codes are provided and reproduced with the IVA computer code as an example of the application of the theory. This methodology is intendet to help other engineers and scientists to introduce this technology step-by-step in their own engineering practice.

In many practical application gases are solved in liquids under given conditions, released under other conditions and therefore affecting technical processes for good of for bad. Useful information on the solubility of oxygen, nitrogen, hydrogen and carbon dioxide in water under large interval of pressures and temperatures is collected, and appropriate mathematical approximation functions are provided. In addition methods for computation of the diffusion coefficients are described. With this information solution and dissolution dynamics in multiphase fluid flows can be analyzed. For this purpose the non-equilibrium absorption and release on bubble, droplet and film surfaces under different conditions is mathematically described.

In order to allow the application of the theory from all the three Volumes also to processes in combustion engines a systematic set of internally consistent state equations for diesel fuel gas and liquid valid in broad range of changing pressure and temperature are provided.

"This book provides a solid fundamental and comprehensive presentation of mathematical and physical principles of multiphase flows … . useful to a wide range of specialists working in the area of heat transfer, turbulence, gas dynamics, boundary layer theory, etc., such as university students, graduate students, design engineers, physicists, chemical engineers, and also to researchers interested by the mathematical theory of multiphase flow and connected topics. … recommended as a text for seminars and courses, as well as for independent study." (Ioan Pop, Zentralblatt MATH, Vol. 1162, 2009)