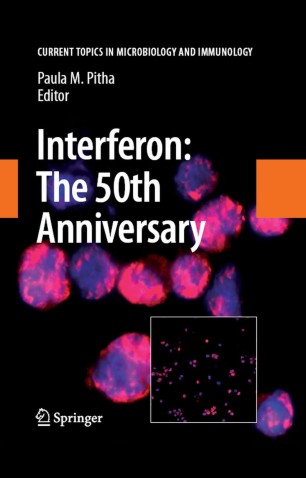 Over the last half of century interferon (IFN), originally discovered as an antiviral protein, has developed from an inhibitor of viral replication to a major force in the antiviral response. Initially studied only by few virologists, IFN was generally considered as a poorly defined protein of limited importance. The development of molecular techniques lead to the identification of a family of IFN genes and has shown an unexpected complexity of type I IFN genes and their expression. Presently, some aspects of the of the pathogen mediated induction of IFN gene expression are understood at molecular level, while others are still at the stage of description. Both Toll like receptors and cytoplasmic RNA helicases were shown to recognize viral nucleic acids and the basis of a distinct recognition of viral nucleic acids from the cellular ones are emerging. Important insights on the virus recognition entity, leading to the expression of interferon and interferon induced genes, have been made in the recent year, which are challenging the accepted concept of the critical role of dsRNA in IFN induction. The availability of genetically modified mice that are lacking either essential components of the interferon inducing pathway, or interferon signaling pathway fully confirmed the original idea, made soon after its discovery, that interferon is the first cellular defense against viral infection.

"This compilation commemorates the 50th anniversary of the discovery of the first cytokine, interferon (IFN), by Isaacs and Lindermann … . The editor has succeeded in compiling a small book that should satisfy readers interested in the history of IFN as well as those who want a convenient overview of the current status of the field. The book is written for scientists and, in particular, serious students of ‘interferonolgy’ … . This is a nice addition to the many compilations on IFN … ." (Patricia Fitzgerald-Bocarsly, Doody’s Review Service, July, 2008)