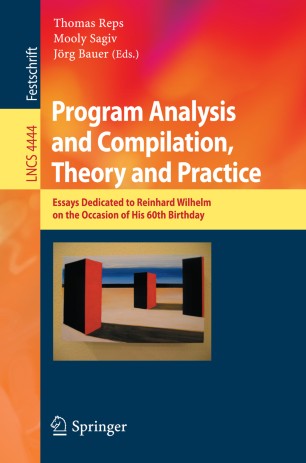 Reinhard Wilhelm's career in Computer Science spans more than a third of a century. During this time, he has made numerous research contributions to the areas of programming languages, compilers and compiler generators, static program analysis, program transformation, algorithm animation, and real-time systems; co-founded a company to transfer some of these ideas to industry; held the Chair for Programming Languages and Compiler Construction at Saarland University; and served since its inception in 1990 as the Scientific Director of the International Conference and Research Center for Computer Science at Schloss Dagstuhl.

This Festschrift volume, published to honor Reinhard Wilhelm on his 60th Birthday on June 10, 2006, includes 15 refereed papers by leading researchers, his graduate students and research collaborators, as well as current and former colleagues, who all attended a celebratory symposium held at Schloss Dagstuhl, Germany. The articles of this volume thus serve also as the proceedings of the aforementioned Dagstuhl symposium.