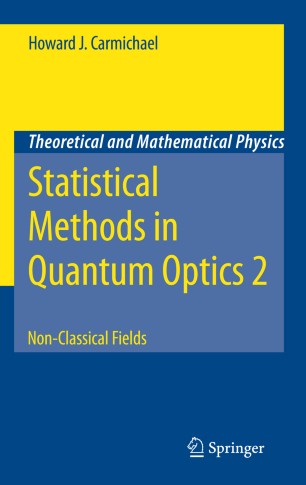 Statistical Methods in Quantum Optics 2 - Non-Classical Fields continues the development of the methods used in quantum optics to treat open quantum systems and their fluctuations. Its early chapters build upon the phase-space methods introduced in the first volume Statistical Methods in Quantum Optics 1 - Matter Equations and Fokker-Planck Equations: the difficulties these methods face in treating non-classical light are exposed, where the regime of large fluctuations – failure of the system size expansion – is shown to be particularly problematic. Cavity QED is adopted as a natural vehicle for extending quantum noise theory into this regime. In response to the issues raised, the theory of quantum trajectories is presented as a universal approach to the treatment of fluctuations in open quantum systems.

This book presents its material at a level suitable for beginning researchers or students in an advanced course in quantum optics, or a course in quantum mechanics or statistical physics that deals with open quantum systems. The text is complemented by exercises and interspersed notes that point the reader to side issues or a deeper exploration of the material presented.