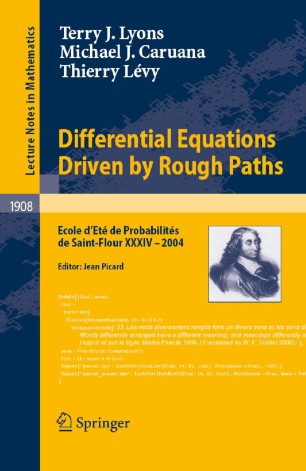 The goal of these notes, representing a course given by Terry Lyons in 2004, is to provide a straightforward and self supporting but minimalist account of the key results forming the foundation of the theory of rough paths. The proofs are similar to those in the existing literature, but have been refined with the benefit of hindsight. The theory of rough paths aims to create the appropriate mathematical framework for expressing the relationships between evolving systems, by extending classical calculus to the natural models for noisy evolving systems, which are often far from differentiable.

"The present book is based on lectures delivered by Lyons at the Saint-Flour Summer School in July 2004. … It is primarily intended for a reader who has never been exposed to the theory of rough paths … . There is no doubt that the book will be useful to anyone trying to enter the sophisticated ground of rough path theory–students as well as experienced researchers." (Bohdan Maslowski, Mathematical Reviews, Issue 2009 c)

“The book provides an introduction to and a survey of the key concepts and results of the theory of rough paths. It grew out of the lecture notes for the corresponding lectures given at the Ecole d’Eté de Probabilités de Saint-Flour XXXIV – 2004. … The book is very well readable and will be useful for everyone interested in learning about the theory of rough paths.” (Evelyn Buckwar, Zentralblatt MATH, Vol. 1176, 2010)