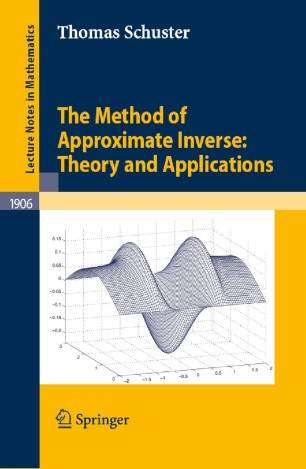 The Method of Approximate Inverse: Theory and Applications

Inverse problems arise whenever one tries to calculate a required quantity from given measurements of a second quantity that is associated to the first one. Besides medical imaging and non-destructive testing, inverse problems also play an increasing role in other disciplines such as industrial and financial mathematics. Hence, there is a need for stable and efficient solvers. The book is concerned with the method of approximate inverse which is a regularization technique for stably solving inverse problems in various settings such as L2-spaces, Hilbert spaces or spaces of distributions.  The performance and functionality of the method is demonstrated on several examples from medical imaging and non-destructive testing such as computerized tomography, Doppler tomography, SONAR, X-ray diffractometry and thermoacoustic computerized tomography. The book addresses graduate students and researchers interested in the numerical analysis of inverse problems and regularization techniques or in efficient solvers for the applications mentioned above.