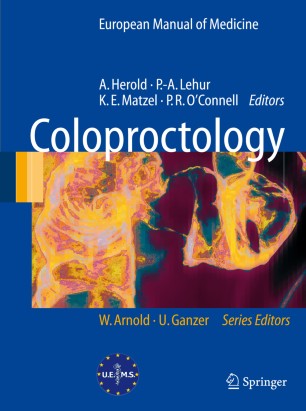 Part of the European Manual of Medicine book series (EUROMANUAL)

This work presents surgical trainees with a comprehensive and condensed guide to the core knowledge required for the European Board of Surgery Qualification (EBSQ) examination. The manual will also be of assistance to practicing coloproctologists across Europe and beyond who have interest in continued professional development.

Written by an international team of experts who have each made noteworthy contributions in their field, the coverage of most aspects of coloproctology in an easy to follow format also makes this manual valuable to other specialists.

Professor Herold is spokesman and leading physician at the EDZ Mannheim, a center of competence in colon and rectal surgery. The center is a well reputed clinic and scientific institute, attached to the medical university Heidelberg/Mannheim.

Professor P. Ronan O'Connell is Consultant Surgeon with a special interest in Colorectal Surgery at the Mater Misericordiae Hospital Dublin since 1990. He completed specialist training at the Mayo Clinic, Rochester, Minnesota, USA and holds fellowships of the Royal College of Surgeons in Ireland (1983) and the Royal College of Physicians and Surgeons of Glasgow (Honorary) (2001). Professor O'Connell is the Newman Clinical Research Professor at University College Dublin (since 2002) and former Chairman of the Division of Surgery at the Mater Misericordiae Hospital (2000-2003) and was external examiner in surgery at Dublin University in 2003.

Professor O'Connell is Specialty Editor of the British Journal of Surgery, Associate Editor of Diseases of  the Colon and Rectum and sits on the editorial boards of Colorectal Disease and Techniques in Coloproctology. He is a referee for several prestigious international journals including the Lancet, Gastroenterology and the Annals of Surgery. He has published widely in the areas of inflammatory bowel disease, pelvic floor physiology, continence and colorectal cancer (in excess of 200 original papers, abstracts, editorials and book chapters). Professor O'Connell has been invited to jointly edit the 25th edition of  Bailey and Loves' Short Textbook of Surgery.

Paul-A. Lehur is professor of  Digestive Surgery at the University of  Medicine in Nantes, France. His affiliated hospital is the "Hôtel-Dieu" de Nantes. He is a member of the "Institut des Maladies de l'Appareil Digestif" of  the University Hospital of Nantes. He is Medical Director since December 2005.

His main clinical and research interests concern colorectal surgery with a special involvement in the treatment of functional disorders of the lower gastrointestinal tract. He is a member of the French "Académie de Chirurgie" of the European Association of Colorectal Diseases, and Fellow of the French chapter of the "American College of Surgery".

Professor Lehur received his training in Paris and Nantes. He spent one year as senior resident at the University of  Medicine in Sherbrooke and at the Royal Victoria Hospital in Montreal (Quebec-Canada) where he specialized in colorectal surgery. He was successively Assistant and Associated Professor of  Surgery and Anatomy in Nantes from 1985 to 1994 before becoming full professor (Digestive Surgery) in October 1994.

Since 2003, Professor Lehur is a member of the Board of Regents of the teaching hospitals of  Nantes Medical University and the Director of  the Department of  digestive diseases in this institution. He is also the President of the Ethics Commitee of  "Pays de Loire no2" situated in Nantes.

Professor Klaus E. Matzel is Associate Professor at the Friedrich Alexander University Erlangen/Nürnberg and Head of the Section of Colorectal Surgery and Proctology. He received his training at the same University.

He is Visiting Professor at the Royal Hospital of Woman, Melbourne and Epsworth Hospital, Melbourne.

He published more than 250 original papers, abstracts, editorials and book chapters in the areas of functional disorders, continence and colorectal cancer. Professor Matzel was invited to more than 70 lectures.