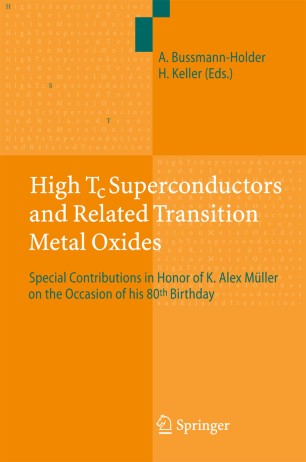 Special Contributions in Honor of K. Alex Müller on the Occasion of his 80th Birthday

This book containing 30 articles written by highly reputed experts is dedicated to K. Alex Müller on the occasion of his 80th birthday. The contributions reflect the major research areas of K. Alex Müller which he activated in high temperature superconductivity and phase transitions. They are theoretical as well as experimental ones and focus mainly on high temperature superconductivity. A smaller part deals with ferroelectricity and their applications. Also in this field there have recently been major break throughs experimentally as well as theoretically which will be addressed by the invited authors.

During the scientific career of K. Alex Müller he made major advances in the understanding of ferroelectricity, which used to be his major research field. The discovery of superconductivity in cuprates for which he received together with J. Georg Bednorz the Nobel Prize in 1987 has not diminished his interest in this area, but has enlarged his activities considerably.