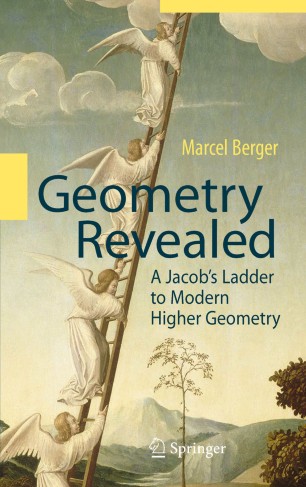 Both classical geometry and modern differential geometry have been active subjects of research throughout the 20th century and lie at the heart of many recent advances in mathematics and physics. The underlying motivating concept for the present book is that it offers readers the elements of a modern geometric culture by means of a whole series of visually appealing unsolved (or recently solved) problems that require the creation of concepts and tools of varying abstraction. Starting with such natural, classical objects as lines, planes, circles, spheres, polygons, polyhedra, curves, surfaces, convex sets, etc., crucial ideas and above all abstract concepts needed for attaining the results are elucidated. These are conceptual notions, each built "above" the preceding and permitting an increase in abstraction, represented metaphorically by Jacob's ladder with its rungs: the 'ladder' in the Old Testament, that angels ascended and descended...

In all this, the aim of the book is to demonstrate to readers the unceasingly renewed spirit of geometry and that even so-called "elementary" geometry is very much alive and at the very heart of the work of numerous contemporary mathematicians. It is also shown that there are innumerable paths yet to be explored and concepts to be created. The book is visually rich and inviting, so that readers may open it at random places and find much pleasure throughout according their own intuitions and inclinations.

he author of numerous successful books on geometry, this book once again is addressed to all students and teachers of mathematics with an affinity for geometry.

Marcel Berger is Ancien Professeur of the University of Paris and emeritus director of research at the Centre National de la Recherche Scientifique (CNRS), from 1979 to 1981 he was president of the French Mathematical Society and from 1985 to 1994 director of the Institut des Hautes Études Scientifiques (IHÉS) in Bures-sur-Yvette.

“It is a must own book for anyone serious about developing a conceptual understanding of the interconnected web of modern geometry and the ever-growing intertwining of geometry with practically all other branches of mathematics. … It is remarkable for a book to provide such a detailed glimpse of contemporary geometry via well developed discussions of so many questions of current interest. It provides the most extensive exposition of geometric thinking I’ve ever seen in a book at this level.” (William H. Barker, MAA Reviews, August, 2017)

“Geometry Revealed is to give the reader a feel for the conceptual frameworks of modern geometry, attempting to reach as far as possible with a minimum of assumed knowledge and formal scaffolding. … Geometry Revealed being useful for research mathematicians as a still reasonably up-to-date survey. … Geometry Revealed offered an ascent into the wonders of a new world.” (Danny Yee, Danny Yee’s Book Reviews, dannyreviews.com, July, 2015)

“By considering a hierarchy of ‘natural’ geometrical objects … it sets out to investigate significant geometrical problems which are either unsolved or were solved only recently. … it is undoubtedly a major tour de force, and if you really want to gain an idea of where geometry is going in the 21st century, you will find plenty of exquisite material here.” (Gerry Leversha, The Mathematical Gazette, Vol. 96 (356), July, 2012)

“The book contains twelve chapters, each of them is a collection of such problems about geometric objects with more and more complexity … . The chapters are independent from each other, any of them can serve as a course. Researchers in geometry can use it as a source for further research. … the book is accessible to a wide audience of people who are interested in geometry.” (János Kincses, Acta Scientiarum Mathematicarum (Szeged), Vol. 78 (1-2), 2012)

“‘Geometry Revealed’ is a massive text of 831 pages which is organized in twelve chapters and which additionally provides indices for names, subjects and symbols … throughout the author quite carefully lays out the historical perspective. … a typical chapter starts with an observation or a problem in elementary geometry. Large parts of the text are very accessible, and a reader who likes (mathematical) physics will often get something extra.” (Michael Joswig, Zentralblatt MATH, Vol. 1232, 2012)

“The author provides the reader with an enormous amount of detailed information and thus yields deep insight into the various topics. … All in all an overwhelming book which is a must … for everyone having sufficient mathematical knowledge.” (G. Kowol, Monatshefte für Mathematik, Vol. 164 (2), October, 2011)

“The book is a very readable account of several branches of geometry, classical and modern, elementary and advanced. … Every chapter is extremely interesting and alive. … The book is rich in ideas, written in an informal style, with no formulae and no unnecessary technical details. … Every part of this book is interesting and should be accessible to a wide audience of mathematicians. … Every mathematician will experience great pleasure in reading this book.” (Athanase Papadopoulos, Mathematical Reviews, Issue 2011 m)