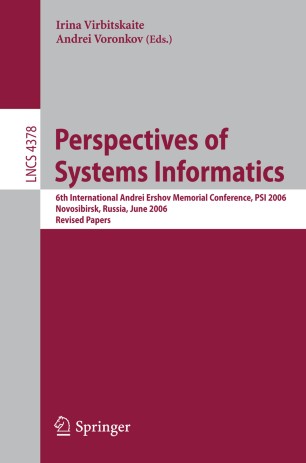 This volume contains the ?nal proceedings of the Sixth International Andrei Ershov Memorial Conference on Perspectives of System Informatics (PSI 2006), held in Akademgorodok (Novosibirsk, Russia), June 27-30, 2006. The conference was held to honour the 75th anniversary of a member of the Russian Academy of Sciences Andrei Ershov (1931–1988) and his outsta- ing contributions towards advancing informatics. The role of Andrei Ershov in the establishment and development of the theory of programming and systems programming in our country cannot be overestimated. Andrei was one of the founders of the Siberian Computer Science School. He guided and took active part in the development of the programming system ALPHA and the mul- language system BETA, and authored some of the most remarkable results in the theoryofprogramming. Andreiisjustly consideredoneofthefoundersofthe theory of mixed computation. In 1974 he was nominated as Distinguished F- low of the British Computer Society. In 1981 he received the Silver Core Award for services rendered to IFIP. Andrei Ershov’s brilliant speeches were always in the focus of public attention. Especially notablewerehis lectures “Aesthetic and HumanFactorinProgramming”and“Programming—TheSecondLiteracy. ”He was not only an extremely gifted scientist, teacher and ?ghter for his ideas, but also a bright and many-sided personality. He wrote poetry, translated the works of R. Kipling and other English poets, and enjoyed playing guitar and singing. Everyone who had the pleasure of knowing Andrei Ershov and working with him will always remember his great vision, eminent achievements and generous friendship.