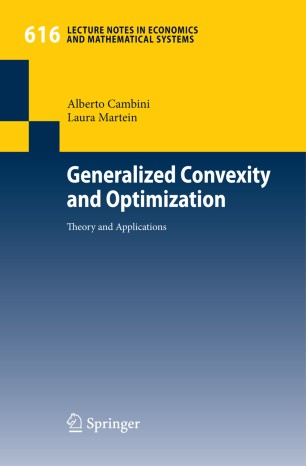 The authors have written a rigorous yet elementary and self-contained book to present, in a unified framework, generalized convex functions, which are the many non-convex functions that share at least one of the valuable properties of convex functions and which are often more suitable for describing real-world problems. The book will be a useful tool not only for researchers, but also for graduates and advanced students working in economics, mathematical programming, the management sciences and operations research. It begins with a review of convex analysis and the fundamental theoretical findings on generalized convexity and on optimization, including their applications. The text continues with an introductory chapter devoted to generalized monotonicity and its relationship to generalized convexity, with the characterizations of important classes of fractional programming, and with theoretical properties and sequential methods. The book also includes numerous exercises and two appendices which list the findings consulted.

"I can highly recommend this excellent new volume to anyone who is trying to teach on generalized convexity/generalized monotonicity in an applied mathematics department or in a professional school. The volume contains proofs and exercises. It also provides sufficient references for those who want to dig deeper as graduate students and as researchers. With dedication and much love the authors have produced a book that is accessible for anyone with a limited background in basic mathematics at the college level. At the same time, it also leads to more sophisticated mathematics for those who spend more time on a particular chapter."

From the Foreword, Siegfried Schaible, University of California, Riverside, USA