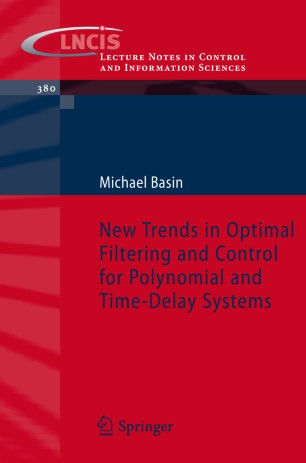 0. 1 Introduction Although the general optimal solution of the ?ltering problem for nonlinear state and observation equations confused with white Gaussian noises is given by the Kushner equation for the conditional density of an unobserved state with respect to obser- tions (see [48] or [41], Theorem 6. 5, formula (6. 79) or [70], Subsection 5. 10. 5, formula (5. 10. 23)), there are a very few known examples of nonlinear systems where the Ku- ner equation can be reduced to a ?nite-dimensional closed system of ?ltering eq- tions for a certain number of lower conditional moments. The most famous result, the Kalman-Bucy ?lter [42], is related to the case of linear state and observation equations, where only two moments, the estimate itself and its variance, form a closed system of ?ltering equations. However, the optimal nonlinear ?nite-dimensional ?lter can be - tained in some other cases, if, for example, the state vector can take only a ?nite number of admissible states [91] or if the observation equation is linear and the drift term in the 2 2 state equation satis?es the Riccati equation df /dx + f = x (see [15]). The complete classi?cation of the “general situation” cases (this means that there are no special - sumptions on the structure of state and observation equations and the initial conditions), where the optimal nonlinear ?nite-dimensional ?lter exists, is given in [95].