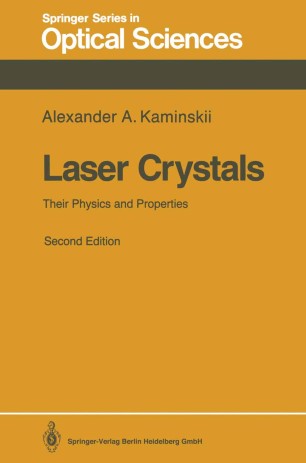 Their Physics and Properties

It was a greatest pleasure for me to learn that Springer-Verlag wished to produce a second edition of my book. In this connection, Dr. H. Lotsch asked me to send hirn a list of misprints, mistakes, and inaccuracies that had been noticed in the first edition and to make corresponding corrections without disturbing the layout or the typo­ graphy too much. I accepted this opportunity with alacrity and, moreover, found some free places in the text where I was able to insert some concise, up-to-date information about new lasing compounds and stimulated emission channels. It was also possible to increase the number of reference citations. The reader of the second edition hence has access to more complete data on insulating laser crystals. However, sections on laser-crystal physics have not been updated, because a satisfactory de­ scription of the progress made in the last ten years in this field would have required the sections to be extended enormously or even a new book to be written. Moscow, July 1989 ALEXANDER A. KAMINSKII Preface to the First Edition The greatest reward for an author is the feeling of satisfaction he gets when it becomes c1ear to hirn that readers find his work useful. After my book appeared in the USSR in 1975 I received many letters from fellow physicists inc1uding colleagues from Western European countries and the USA.