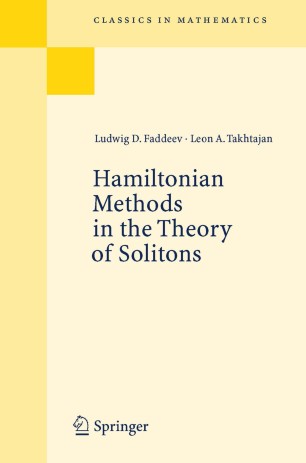 Hamiltonian Methods in the Theory of Solitons

The main characteristic of this now classic exposition of the inverse scattering method and its applications to soliton theory is its consistent Hamiltonian approach to the theory. The nonlinear Schrödinger equation, rather than the (more usual) KdV equation, is considered as a main example. The investigation of this equation forms the first part of the book. The second part is devoted to such fundamental models as the sine-Gordon equation, Heisenberg equation, Toda lattice, etc, the classification of integrable models and the methods for constructing their solutions.

Ludwig D. Faddeev was born in Leningrad, USSR in 1934. He graduated from the Leningrad State University in 1956 and received his Ph.D. from there in 1959. Since 1959 he has been affiliated with the Leningrad branch of Steklov Mathematical Institute and was its Director from 1976 to 2000. Currently Faddeev is Director of the Euler International Mathematical Institute in St. Petersburg, Russia, and Academician-Secretary of the Mathematics Division of the Russian Academy of Sciences. He was President of the International Mathematical Union during1986-1990.

Faddeev’s principal interests and contributions cover the large area of mathematical physics. They include, in chronological order, quantum scattering theory, spectral theory of automorphic functions, quantization of Yang-Mills theories, Hamiltonian methods in classical and quantum integrable systems, quantum groups and quantum integrable systems on a lattice. Faddeev’s work laid a mathematical foundation for functional methods in quantum gauge theories. A great deal of his work was directed towards development of Hamiltonian methods in classical and quantum field theories.

Leon A. Takhtajan was born in Erevan, Republic of Armenia of the USSR, in 1950. He was schooled in Leningrad, graduated from the Leningrad State University in 1973, and received his Ph.D. from the Leningrad branch of Steklov Mathematical Institute in 1975, with which he was affiliated during1973-1998. Since 1992 he has been Professor of Mathematics at Stony Brook University, USA.

Takhtajan’s principal interests and contributions are in the area of mathematical physics. They include classical and quantum integrable systems, quantum groups, Weil-Petersson geometry of moduli spaces of Riemann surfaces and moduli spaces of vector bundles, and application of quantum methods to algebraic and complex analysis. His work, together with L.D. Faddeev and E.K. Sklyanin, led to the development of the quantum inverse scattering method from which the theory of quantum groups was born.