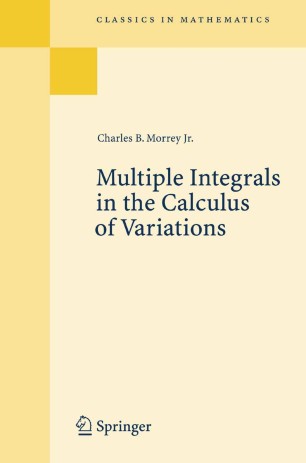 Multiple Integrals in the Calculus of Variations

From the reviews: "…the book contains a wealth of material essential to the researcher concerned with multiple integral variational problems and with elliptic partial differential equations. The book not only reports the researches of the author but also the contributions of his contemporaries in the same and related fields. The book undoubtedly will become a standard reference for researchers in these areas. …The book is addressed mainly to mature mathematical analysts. However, any student of analysis will be greatly rewarded by a careful study of this book."

M. R. Hestenes in Journal of Optimization Theory and Applications

"The work intertwines in masterly fashion results of classical analysis, topology, and the theory of manifolds and thus presents a comprehensive treatise of the theory of multiple integral variational problems."

"The book is very clearly exposed and contains the last modern theory in this domain. A comprehensive bibliography ends the book."

Charles Bradfield Morrey Jr. (1907 - 1984) received a PhD degree in mathematics from Harvard University, Cambridge, MA, in 1931, and was awarded a National Research Council Fellowship afterwards that brought him to Princeton University, Princeton, NJ, from 1931 to 1932, and to the Rice Institute, Houston, TX, from 1932 to 1933. In 1933 he took a position at the Department of Mathematics at the University of California, Berkeley, where he was actively involved in teaching and research until his retirement in 1973.

Morrey was an outstanding mathematician, known also as a very effective and successful teacher. He solved Hilbert’s Nineteenth Problem, and also contributed considerably to the solution of questions raised in Problem No. 20. Following in the footsteps of Leonida Tonelli, Morrey became the founder of the modern Calculus of Variations, and the present treatise is the mature fruit of his achievements. This and his other books have had and continue to have a wide influence on the teaching of mathematics.

Morrey’s scientific accomplishments and his administrative abilities were complemented by his gift for friendship, his charming sense of humour, and his continuing concern for people, for mathematics, and for music.