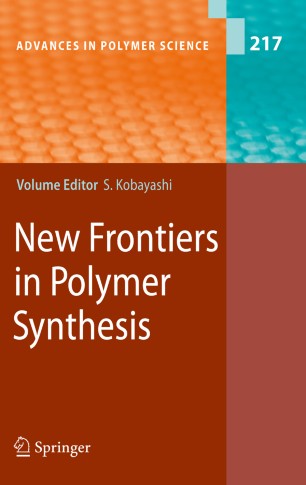 It is generally accepted that a new material is often developed by ?nding a new synthesis method of reaction or a new reaction catalyst. Historically, a typical example may be referred to as a Ziegler–Natta catalyst, which has allowed large-scale production of petroleum-based polyole?ns since the middle of the 20th century. New polymer synthesis, therefore, will hopefully lead to creation of new polymer materials in the 21st century. This special issue contributed by three groups focuses on recent advances in polymer synthesis methods, which handle the cutting-edge aspects of the advanced technology. The ?rst article by Yokozawa and coworkers contains an overview of the - action control in various condensation polymerizations (polycondensations). Advanced technologies enabled the control of stereochemistry (regio-, g- metrical-, and enantio-selections), chemoselectivity, chain topology, and st- chiometry of monomers, giving a high molecular weight polymer. It has been recognized for a long time, however, that polycondensation is a dif?cult p- cess in controlling the reaction pathway, because the reaction is of step-growth and the reactivity of monomers, oligomers, and polymers are almost the same during the reaction and hence, the molecular weight of polymers and its d- tribution (M /M ) are impossible to regulate. The authors’ group developed w n a new reaction system (chain-growth condensation polymerization), changing the nature of polycondensation from step-growth to chain-growth; namely the propagating chain-end is active, allowing for control of the product molecular weight as well as the distribution.